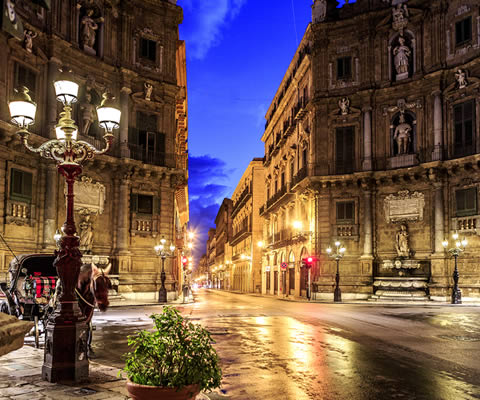 A bit of History and Art

Also called Teatro del Sole because at least one of the architectural wings is illuminated by the sun during the hours of the day, the 4 Canti have represented in the past the exact Center of the city within the walls. Naturally this had a strong symbolic and iconological meaning with the idea of the street cross, merging everything into a strong interpenetration between the human and the divine sphere, also because on the numerical plane the number 4 is the number of man (the seasons, the elements, age) and three (the orders on which the 4 “retabli” are articulated) is instead the sacred number by definition.

Crossing of 2 streets closed to traffic (Corso Vittorio Emanele and Via Maqueda Alta) is the meeting point for those who want to stop for a moment to reflect on what to do in Palermo. In fact, the embarrassment of choice is a must. To the north go towards the Politeama and / or the Massimo, to the south towards P.zza Pretoria and the Station, to the east towards the sea with P.zza Marina and Foro Italico, to the west towards the cathedral.
It is also a crucial and fundamental junction on the day of the feast of Santa Rosalia, in which thousands of Palermitans crowd Piazza Vigliena (so called) awaiting the passage of the “Santuzza”.

This website uses cookies to improve your experience. We'll assume you're ok with this, but you can opt-out if you wish. OkRead more